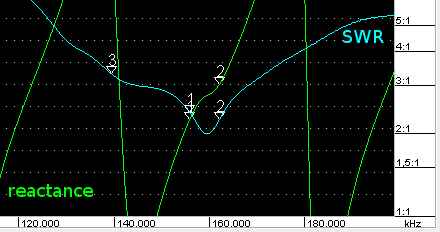 This is a reactance and SWR plot of a simple coaxial dipole antenna, made by cutting the shield from a quarter wave length of coax and using the outside of the shield of the next quarter wave to make a dipole. A choke is placed at the end of the lower leg to try end it and stop the signal travelling further along the coax. Looking at the plot above, this doesn’t seem to have happened.

It proved quite hard to bring the SWR to an acceptable level around the 145MHz area intended. Looking at the reactance graph it seems that the whole length of the feeder cable is resonating, so the  choke (even a quite big choke) is not doing its job. In the end I gave up on this antenna and have mounted a half wave mobile antenna on a copper pipe instead.

It would be nice to revisit this antenna. Its advantage is that it can be run up a flag pole on a cycle or used as a backpack antenna. It is also quite portable for use when travelling. A suggestion has been to look up the “Flowerpot Antenna”. This uses a self resonant choke based on both the inductance and capacitance of a coil of coaxial cable. There are tables on the web detailing the dimensions of the coil for certain operating frequencies. For 145MHz I’d need to find some 25mm electrical conduit to use as a former.