The conversation at the radio club got onto the subject of magnetic loops. It seems they are seen as a bit of a poor choice. I’ve considered building a loop, but have been worried about the capacitor needed and the potentially large voltages that can develop across it. It would be hard or expensive to find a good variable capacitor, and I’d not want to leave one of these things unattended in the attic.

The problem stated with magnetic loops is their efficiency. They need little resistive loss in order to work well. There are numerous portable loop projects online using coaxial cable and small trimmer capacitors. Apparently people use these well with low powered radios such as the Yaesu 817. There is still the question that if the loop can be made to work well there must be a large voltage across the capacitor, and a large loop current.

66pacific.com have a magnetic loop calculator. It’s easy to put the information into a web site, but the web site does seem to use formulas that take quite a lot of fiddly stuff into account. According the site, if I make a 5 metre loop using 22mm copper pipe then I should be able to make an antenna that works well on the 20m, 30m and 40m bands. The capacitance will need to vary from 111pF to 32pF, and if the loop works well and my solder joints are really good it will need to withstand 1500V RMS for use with a 10W radio. There could be quite huge tolerances here because I’m not going to be able to make anything that accurately. It won’t be very portable, but it could work.

This diagram represents a possible trombone capacitor for use at the top of a magnetic loop. The red lines represent 15mm pipe. The black lines represent 22mm pipe. There are four capacitors here – two parallel pairs in series with each other. This can give me a reasonable capacitance in a short length. A mechanism is needed to slide the trombone in and out.

There seems a compromise here. If I make the tubes too long then I expect I’ll be changing the loop quite a bit. There will be added inductance. If I make them short by doubling up then the antenna may become harder to tune. I’d wondered about using a motor system with a microcontroller that can replay positions according to desired frequency, but if the movements are too small then it could be very hard to achieve, and could be ruined by temperature changes.

An alternative arrangement could be to place a pair at opposite sides of the loop. Then the loop can be taken apart for transport. It could become harder to adjust because of the size of the moving half loop. If not for that low 32pF needed at 14MHz there is some merit in examining the idea of distributing the capacitors around the loop to ease dismantling. What would it do for efficiency? 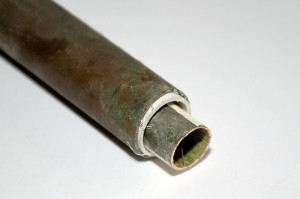 This experimental trombone was made using 22mm copper pipe on the outside, 15mm pipe on the inside and 20mm plastic conduit as the dielectric. The conduit fits tightly into the outer pipe and will hopefully block the high voltage. The 15mm pipe fits loosely inside. The overlap is about 40cm. If I built this into the 5 metre loop then it would come between 1/3 and 2/3 of the way into the loop. It’s perhaps too big.

The multimeter shows a reading of 178pF.

It can be quite hard to find the dielectric properties of the plastic pipe, and I wondered how it may behave at radio frequencies. It may change permittivity, and it may be lossy. I connected my Mini-VNA network analyser through a spare piece of cable to the crocodile clips and calibrated it. It’s perhaps not ideal and subject to very large errors! I don’t have a capacitance bridge to play with. My test leads were long which may have transformed the impedance depending on frequency.

I swept the Mini-VNA over the frequency range of interest and took measurements at 8MHz and 14MHz with the pipes fully overlapping and partially overlapping. The impedance dropped with increasing frequency as expected.

The capacitance was calculated only using the Xs reading and the Rs reading ignored. It would appear that capacitance is increasing with frequency, but this may be due to other error in the measurement. I checked calibration by shorting the crocodile clips, leaving them open and applying a load made up of two 100 ohm resistors in parallel.

So obviously my accuracy could be improved. All I can deduce is that capacitance does seem to go up as the overlap between the pipes increases. The test would be to try it in a loop.