CAIRO is a standard for wiring between radios and accessories. It is sometimes used in RAYNET to allow remote control of radios, and offers an advantage that any CAIRO accessory can be connected to any CAIRO radio. That would be very useful for me, for example 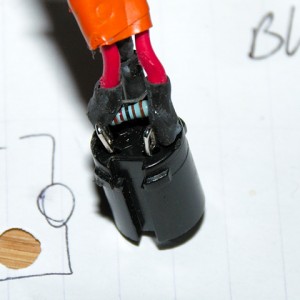 I tried making a passive CAIRO adapter for the Yaesu VX-7 following the
Passive Series Circuit. I also made a breakout cable to allow it to work with a PC headset. I used a 2K2 resistor rather than a 4K7 in the adapter based on the information in the Yaesu manual.

An Active Adapter should perform better. If I have time I’ll try to build one for the Yaesu 8900 and any other radio that uses its 6 pin mini-DIN connector. This circuit will clearly separate PTT and mic, and cause the mic signal to be sent through its quasi-balanced shielded line. The phantom powering arrangement makes it significantly easier to tie the MIC LOW line to system ground. It’s not true balanced line, and not like the common mode phantom power technique used in theatrical systems.  I hope it works well.